He said he could be trusted with our NHS

He said he could be trusted with our NHS.  He said there’d be no top down reorganisation.  He said he would protect the frontline at all costs.  He toured hospitals making these promises, and repeated them over and over again.

He said he could be trusted with our NHS.  He said there’d be no top down reorganisation.  He said he would protect the frontline at all costs.  He toured hospitals making these promises, and repeated them over and over again. 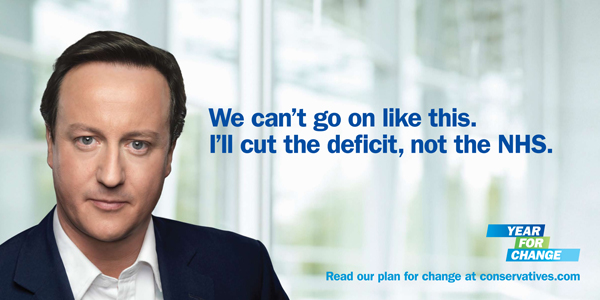 He’s broken these promises – and our Tory MP in South Swindon smiled, agreed with everything Dave said and voted for it.

Anyone who follows the news will know that the envy of the world, the NHS, is under threat.  Despite Royal Colleges, professional health care bodies and patients organisations warning of the danger the Health and Social Care Bill would cause to the NHS, it’s been given Royal Assent – largely due to Nick Clegg’s band of yellow-Tories waving it through.
The Labour Party is truly the last line of defence against what the Tories are doing to this wonderful institution that is envied by the world.
We’re calling on our Tory-led council to work to protect our NHS.  This Bill also creates so called ‘Health and Wellbeing boards’, and we’re calling on them to adopt Labour’s NHS Pledge which has been launched today.  We should be sending a message, loud and clear, to NHS commissioners and providers to work to these principles.
Created by Aneurin Bevan in 1948, there were three key principals:
It’s not right that, in some areas, patients are now routinely being denied treatment based on their smoking habits or weight.
Everyone should get the same treatment.  Living in a poorer area should not mean those people get a lower standard of health care.  Already in some areas, patients are being denied routine treatments that are available elsewhere.  How is this right?
When Labour came to power in 1997, it inherited an NHS that had been ignored.  It was not uncommon for patients to wait for over 18 months for an operation they needed.  When Labour left office, waiting times were left at an historic low.  David Cameron is taking us back in time – since Labour’s targets were relaxed, there has been an increase of over 25% in people who have waited longer than 18 weeks for an operation.
The free for all that the Tories want is not what is best for patients, and some hospitals are already threatened by this.  We call for a ‘one NHS’ approach in all communities, everywhere.
We’re already seeing signs that financial incentives might mean sub-standard care for NHS patients.  Cheaper and less effective drugs are already being prescribed.  We must fight this.
The NHS belongs not to one person, or one government – but to us all.  A sixty year legacy of world class health care is at risk.  You can make a difference, by writing to your Tory and Lib Dem councillors, and to the local Tory MP asking them to support our NHS Pledges, like our PPC, Anne Snelgrove does:
‘I’m proud to sign up to Labour’s NHS pledges. Every time I meet local Swindon people who have benefitted from low waiting lists, extra dental surgeries and the fantastic facilities at the Great Western Hospital, all introduced by the last Labour Government, my faith and support for the NHS is reaffirmed.
The NHS is there for us all, help us keep it that way by signing up to Labour’s NHS pledges.’